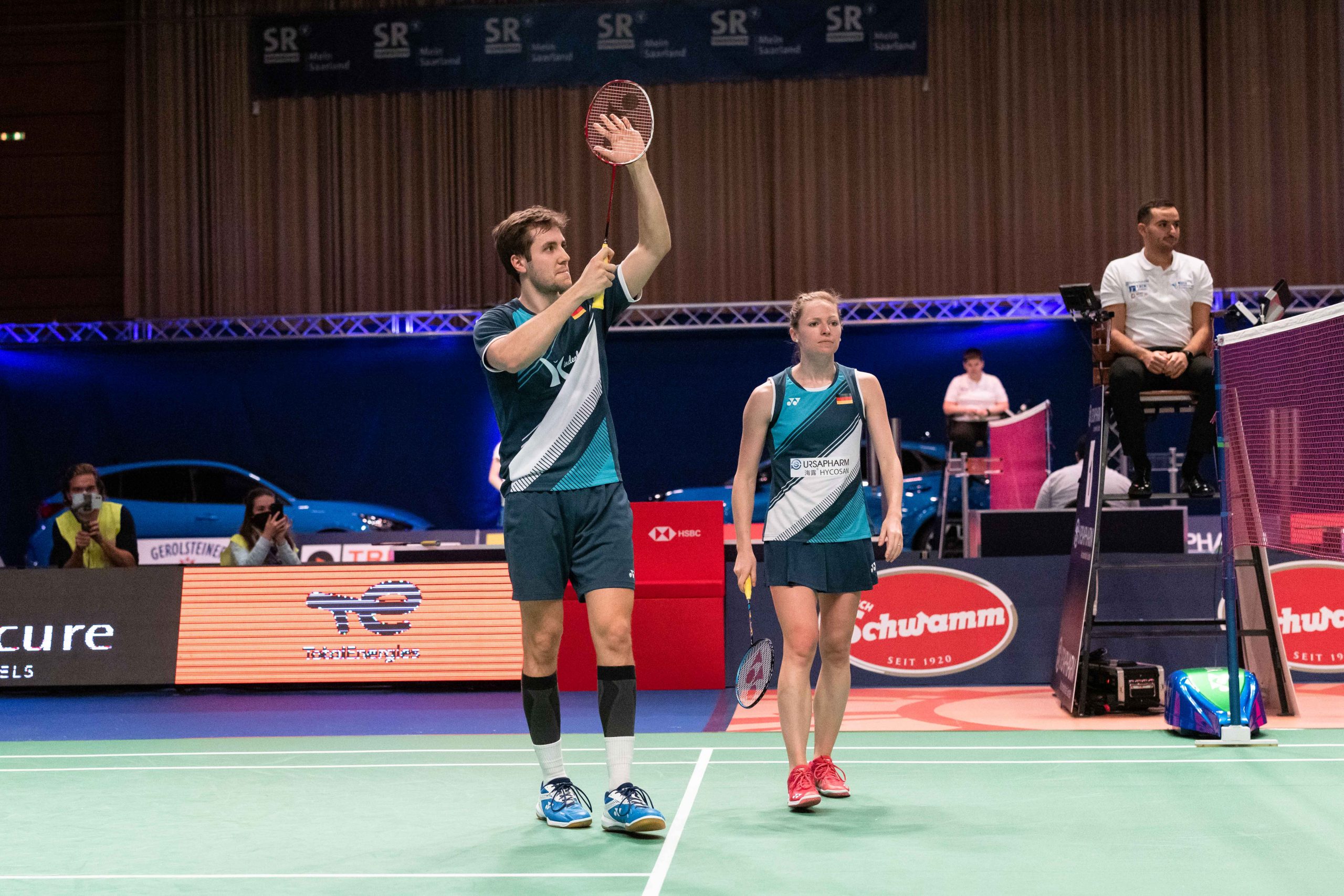 Relief for the German badminton athletes. After Mark Lamsfuß and his doubles partner Marvin Seidel surprisingly lost in the first round yesterday evening, luck did not seem to be on the side of the Germans Yvonne Li, Jones Jansen and Linda Efler on Wednesday either. Mark Lamsfuß and his mixed partner Isabel Lohau did much better and played a great 23:21/21:17 against the slightly favoured Chun Man and Ying Suet from Hong Kong. Thus, after the first round of the tournament, only two German doubles pairs remain in the fight for the triumph at the HYLO Open 2021. Translated with www.DeepL.com/Translator (free version)

With some first-class rallies and spectacular point wins, the pairing of Lohau/Lamsfuß even won over the numerous Indonesian spectators in the Saarlandhalle in their first round match. Cheered on by the loud shouts of "Germany" from the Asian badminton fans, the German mixed pair brought the first set home by a very narrow 23-21 margin after having led by five points in the meantime. As the two local heroes did not let up in the second set and drove the seventh-seeded Hong Kong Chinese Chun Man/Ying Suet to despair time and again, Lohau and Lamsfuß not only secured the decisive second set with 21:17, but also the ticket for the next round on Thursday. Translated with www.DeepL.com/Translator (free version)

"At a tournament in Germany, it is always nice to advance one round. That's why we feel really good after the win today," Isabel Lohau was pleased about the successful start, while Lamsfuß then put the success into tactical terms: "We watched some videos and came to the conclusion that we simply have to follow through with our game and get into the attack. Especially on centre court the ball gets fast and we used that well." The two Germans will now face Indonesian duo Mychelle Bandaso and Adnan Maulana in the last 16. Translated with www.DeepL.com/Translator (free version)

Yvonne Li did not use her chance to enter the second round of the HYLO Open. The finalist from last year started well in her match against Iris Wang (USA) and secured the first set with 21:19, but in the second set she could not cope with the American who was playing better and better. The result: 11:21 and 18:21 from the German's point of view and the resulting first round exit this year. "I made far too many mistakes and played very unsteadily," Li said honestly after the match, but at the same time she was happy for her opponent: "Iris and I are good friends. So the positive thing for me about the outcome of the match is that at least one of us advanced one round.

Efler and Jansen fail against too strong Englishmen

While Lohau and Lamsfuß, a German mixed pair, made it into the second round, the second mixed doubles pair of Linda Efler and Jones Jansen had to accept a clear 9:21/14:21 defeat against the third seed Lauren Smith and Marcus Ellis. The strong England duo showed early on that they are a force to be reckoned with in the course of the tournament. Jones Jansen also acknowledged this after the match: "Lauren and Marcus did really well. However, we couldn't play at our best either and somehow didn't feel that comfortable on the field today." While the tournament is over early for Jansen, Linda Efler can make amends with her doubles partner Isabel Lohau on the third day of competition. The two Germans will meet Julie Finne-Ipsen and Mai Surrow from Denmark in the round of 16.

The death of the favourites continues

The second day of the tournament on Wednesday proved that surprises are always to be expected at the HYLO Open. The biggest coup was probably the 24-year-old Loh Kean Yew from Singapore, who knocked out the number one seed Chou Tien Chen in the men's singles with 21:18 and 21:13. After an injury in the second set, it was thus a painful defeat for the 31-year-old in two respects. The world number four found fellow sufferers among others in the two Stoeva sisters, last year's winners in the women's doubles, who had to bow out of the tournament in the first round just like their opponents Maiken Fruergaard and Sara Thygesen from Denmark, who were seeded fourth.