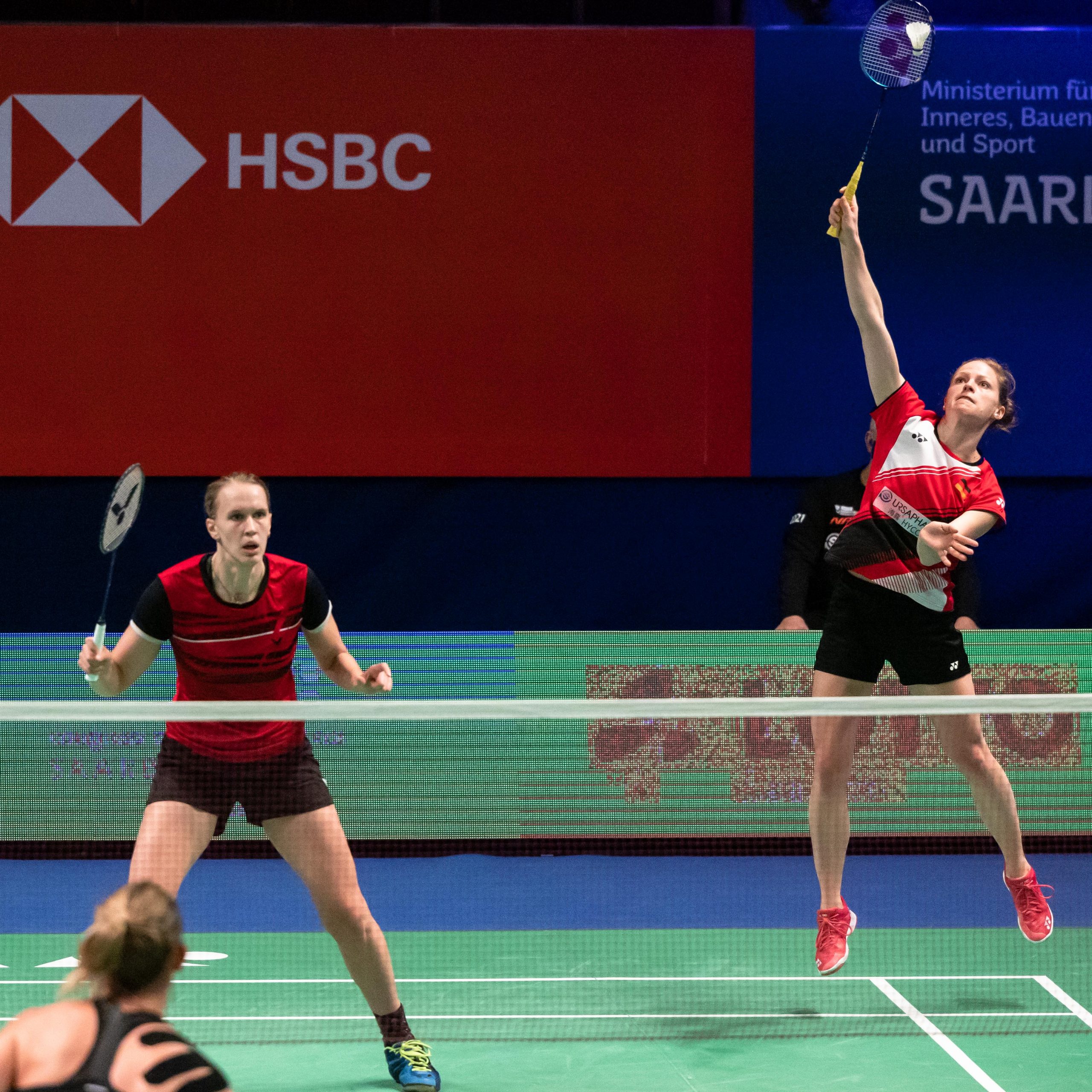 Local hero Isabel Lohau reached the round of the last eight in two disciplines.

Strong performance of the German doubles teams: The badminton fans in the Saarlandhalle can also look forward to two pairs with national participation on Friday. The woman of the hour is local hero Isabel Lohau, who reached the round of the last eight in the women's doubles with her partner Linda Efler as well as in the mixed with Mark Lamsfuß. "I am happy that I found my rhythm again here in Saarbrücken after the four-week break I had to take before the French Open. The matches with Linda and Mark weren't perfect yet, but of course I'm more than happy that we were able to reach the next round," expressed a relieved Isabel Lohau at the end of the third day of the tournament.
The 29-year-old and her partner Linda Efler got things started early Thursday morning against the Danes Julie Finne-Ipsen and Mai Surrow. In the opening match of the third day of the tournament, the spectators initially had to watch how the two Germans carelessly squandered an interim six-point lead at the end of the first set. At 21-21, however, Lohau/Efler tightened the reins once again and secured the two necessary points to win the set 23-21. Those who expected a match on equal terms from then on were abruptly disappointed in the second set. The German women played great, scored one point after the other and won set two with 21:9 and the ticket to the quarterfinals. There, Lohau and Efler will now face Rin Iwanaga and Kie Nakanishi from Japan.

Lamsfuß and Lohau make short work of it
Around eight hours later, quarterfinal ticket number two was to follow. Against the Indonesian mixed Adnan Maulana and Mychelle Bandaso, Lohau and Lamsfuß dominated the first set in all respects and created a perfect starting position for the second set with 21:11. In the second set, Maulana/Bandaso adapted better to the Germans' game and were able to pull away to 9:6. Lohau and Lamsfuß, however, were not impressed by this and regained the lead with five points in a row and did not relinquish it until the end of the match. Thus after only 33 minutes the highly deserved 21:11/21:18 victory was on the paper. "We set out to put a lot of pressure on the serve and the reception. We succeeded very well, especially in the first set," Lamsfuß summed up after the end of the match. With Lohau he will meet the next Indonesian and second seeded mixed team Praveen Jordan and Melati Oktavianti in the round of the last eight on Friday.

Indonesians dominate men's doubles
While the spectators can still look forward to matches with German participation in two doubles disciplines, another nation dominates in the men's doubles. Five of the eight remaining pairs will be playing under the Indonesian flag. Thus it is already certain that at least one Indonesian men's doubles team will be in the final of the HYLO Open 2021. The hottest contenders for the title are certainly still the two best doubles in the world, the "Minions" Marcus Gideon and Kevin Sukamuljo and the "Daddies" Mohammad Ahsan and Hendra Setiawan.

Surprises in women's singles
In the women's singles, however, not all favorites could prevail on Thursday. Both the number one seed Ratchanok Intanon (THA), who had to retire injured at 6:11 in the third set against Belgian Lianne Tan, and her compatriot and second seed Pornpawee Chochuwong (10:21/17:21 against Phittayaporn Chaiwan) were eliminated in the round of 16. Michelle Li from Canada did better, winning her second round match. In addition, two players are currently surprising in Saarbrücken who no one had previously expected: Aliye Demirbag and Neslihan Yigit from Turkey each secured a quarter-final ticket and thus caused astonished faces in their home country, which is not necessarily known for successful badminton.